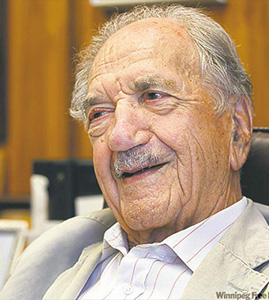 Albert Diamond Cohen came from a poor immigrant family of eight. He was born in Winnipeg, Manitoba in 1914 and served with the Royal Canadian Navy from 1942 to 1945. He married Irena Kankova in 1953 and together they raised three children, Anthony, James and Anna-Lisa. Albert and his five brothers set up a small import and distribution company and, by 1939, the family had scraped together enough money to create General Distributors Ltd., a wholesale import firm.

By 1950, General Distributors sales amounted to $1 million. In 1952, the company obtained exclusive Canadian rights for Papermate pens. Albert negotiated the distribution rights of Papermate in Canada whereby Gendis continued to distribute their products until 1962 after Papermate’s 1955 sale to the Gillette Company.   Later, in 1955, Cohen landed the Canadian distribution rights to Sony products. Spotting an ad in a Japanese newspaper, Cohen met with Sony co-founder, Akio Morita. On the basis of a handshake deal, Cohen cemented a partnership that would last for decades. Gendis’ stake in Sony of Canada was sold back to Sony Corporation of Tokyo, Japan in 1995 for $207 million. In recognition of his forty year association with Sony, Albert received the Sony Lifetime Achievement Award in Tokyo in 2000.

The six brothers expanded into real estate and retailing. Over the years, they established several hundred SAAN Stores as well as Metropolitan and Greenberg junior department stores in all provinces in Canada. SAAN Stores was eventually sold by Gendis in 2004 and later sold again in 2008 to Genuity Capital, owner of The Bargain Shop discount chain.

Albert began to accumulate real estate in downtown Winnipeg starting in the early 1960s and Gendis finally sold its city block of property to Manitoba Hydro in 2003 for $16.2 million to allow for construction of the new Manitoba Hydro headquarters which officially opened in September 2009.

Cohen was considered to be one of the major community builders/philanthropists in Winnipeg. He has been a large contributor to the University of Manitoba, St. John’s Ravenscourt School, The Royal Winnipeg Ballet, Manitoba Theatre Centre, Winnipeg Symphony Orchestra, Manitoba Opera, and various Winnipeg hospitals. He held three Canadian speed skating records in the over-70 age category and last skated at age 94.