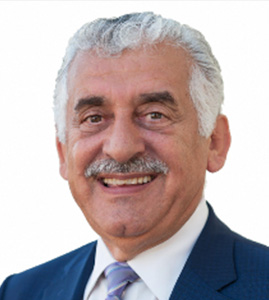 Albert was born and raised in Kherbetrouha, Lebanon, where he was a schoolteacher and principal. He immigrated to Winnipeg in 1969 and his first job was loading trucks at Peerless Garments. He continued at Peerless Garments, working his way up until he was appointed General Manager in 1979. Since 2006, he has been the President and CEO. During that time, he has increased the company’s annual sales from $3 million to over $45 million. The company is a garment manufacturer and importer carrying two main businesses: leather and cold weather garments. For over 45 years, he has worked closely with the Department of National Defence staff working on the design and development of specialized garments for the military.

Recognized for his prominent and selfless philanthropy and community service, Albert and his wife, Samira, have supported organizations such as Free the Children, Sick Kids Foundation, Variety: the Children’s Charity, the United Way, World Vision, Winnipeg Harvest, Habitat for Humanity, and many others. Albert has served on non-profit boards such as the World Trade Centre, The Winnipeg Foundation, Manitoba and Winnipeg Chambers of Commerce, Addictions Foundation of Manitoba, and the St. Boniface Hospital Foundation. He was a recipient of the Queen’s Diamond Jubilee Medal; he is a Member of the Order of Canada; he was named to the Order of Manitoba; and he was named Humanitarian of the Year in 2012 by the Canadian Red Cross, among numerous other honours.