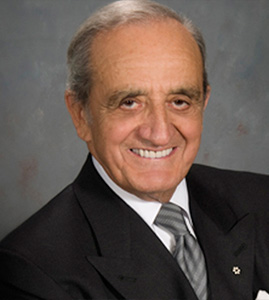 You can be excused if you’re not sure which of Arthur Mauro’s careers is being honoured by the Junior Achievement Hall of Fame.

Was it the more than two decades as a lawyer specializing in transportation and administrative law? The 10 years he spent at the helm of Investors Group, the mutual fund giant? Or maybe the nine years as the chancellor of the University of Manitoba? How about the fact that he’s a member of both the Order of Canada and the Order of Manitoba? The answer, of course, is all of the above. And more. In fact, you’d be hard-pressed to find a businessperson with a more varied career than Mauro.

He became a partner with the Thorvaldson & Company law firm in 1958 and acted as counsel for the province of Manitoba before the McPherson Commission on Transportation and the commission of inquiry on Air Canada facilities in the province.

In 1969, he left his law practice for the corporate world, first as executive vice-president of Great Northern Capital in Toronto. He returned to his adopted hometown – Mauro was born and raised in Thunder Bay – three years later as president of Trans Air Airlines and then moved on to Investors Group in 1976. He was named president in 1981 and CEO in 1985.

Upon leaving Investors Group, he became chancellor of the University of Manitoba in 1991, serving until 2000. From 2009 through 2012, he served in the same capacity at Lakehead University in Thunder Bay.

When he wasn’t leading a company from the corner office, he was helping others in the boardroom. Mauro was a director or officer of many companies, including Montreal Trust, Great-West Life, Power Financial Corp., Canadian Airlines, C.P. Hotels, Atomic Energy of Canada and United Grain Growers.

Ask Mauro about his role in building the Investors Group powerhouse and he’s quick to credit his predecessors for enabling him to come into such a great situation. “We stand on the shoulders of the people who went before,” he says. One aspect of his time there of which he is proud, however, is the company’s expanded involvement in the community, both at a corporate level and through the volunteerism of its many employees.

“I have a very strong feeling that senior executives of a company and corporations themselves have an obligation that extends beyond the balance sheet. They have an obligation to the community in which they’re located. I think that’s important, particularly in Winnipeg, where we don’t have the multitude of head offices that other major centres have,” he says.

He jumped at the chance to serve both universities, in part because he felt he had long overdue debts that needed to be repaid. “I don’t think you can live in Winnipeg very long before you realize there’s a price you pay for citizenship, not only as a Canadian but a citizen of this community. You’re supposed to play, you’re supposed to get out there and do what you can,” he says.