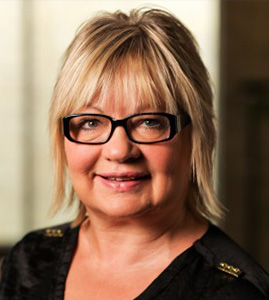 As CEO & Film Commissioner for Manitoba Film & Music for the past three decades, Carole has been at the forefront of developing Manitoba’s film and music industries into international success stories. Her tireless efforts have earned her a reputation as an effective and forward-thinking business leader.

Carole is known locally, nationally and internationally as an ambassador for Manitoba filmmakers, musicians, producers, creators and crew. She has been a champion for independent artists in their earliest efforts including Guy Maddin, Doc Walker, The Crash Test Dummies, and many others. Carole pioneered the first film tax credit in western Canada in 1997. During her time at MFM, Manitoba’s film production volume has grown from $12 million in 1992 to over $173 million in 2018. Through the international relationships Carole built as the province’s Film Commissioner, many studios such as Warner Brothers, Sony, 20th Century Fox & Disney have filmed in Manitoba. The province’s music industry has similarly blossomed into a major economic driver, with more musicians per capita than any other province.

In addition to her work at MFM, Carole currently serves on the Board of Directors at the National Screen Institute, the Winnipeg Convention Centre, and formerly at the Winnipeg Chamber of Commerce, Society for Manitobans with Disabilities, and others. Carole was also instrumental in bringing the JUNOS to Winnipeg in 2005 and was Co-Chair of the 2014 Winnipeg Juno Host Committee. In 2012, Carole was a recipient of the Queen’s Diamond Jubilee Medal. In 2014, Carole was a recipient of the Order of Manitoba.