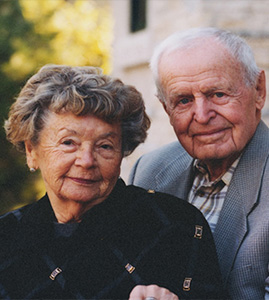 Millions of Canadians when they go to bed each night can quite literally thank David and Katherine Friesen (David Friesen (1911-2007) & Katherine Friesen(1918-2015)) for the roof over their heads.  The husband and wife team didn’t start their careers with the idea of founding a housing company but like many entrepreneurs, when they saw their chance, they jumped.

Following their marriage in 1943, they each pursued their separate careers – Katherine was earning $50 per month as a school teacher while David was a lawyer who would sometimes be paid with chicken or pie in lieu of cash – but they also dipped their toes into real estate, building two houses. They lived in one and sold the second. Being post-Russian Revolution refugees, they were all-too-familiar with difficult times but they also knew the value of hard work.

By 1951, they saw a void following the Second World War and realized that real estate was in great need. They hired five workers and built seven houses in River Heights in the first year of Quality Construction. The following year they built another 13.  Their vision was build homes and provide shelter for families, creating communities where people could put down roots, raise their families and pursue their dreams. But they didn’t stop at building. In 1952, they started Rancho Realty and Katherine – most people called her “Kay” – became the broker and salesperson, starting an affiliation with the local real estate association that would last for more than 30 years.

There are many female real estate agents today but Kay lead the way when many women were content to be stay-at-home moms. She also volunteered at the Children’s Hospital, First Mennonite Church and many other causes. David, meanwhile, was a founding member of the Crosstown Credit Union, president of the Manitoba Home Builders Association and a member of the Winnipeg Planning Committee and the Manitoba and Canadian bar associations. Together, they founded Autumn House Inc., a senior citizens home, the Winnipeg Mennonite Elementary School and the Chair of Mennonite Studies at the University of Winnipeg.

Today, Qualico is a fully-integrated company with operations in Winnipeg, Calgary, Edmonton and Vancouver. Its activities include residential land acquisition and development, single and multi-family home divisions, commercial and industrial development, property management and building supply and manufacturing divisions.