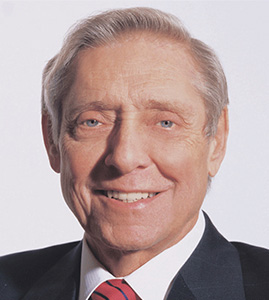 Dr. Israel Asper was born to a Jewish family in Minnedosa, Mb, the son of musicians who had emigrated from the Ukraine. Asper attended the University of Manitoba. In 1957 he received his law degree from the University of Manitoba, and was called to the bar shortly thereafter. He founded the firm of Asper,  Freedman & Co. in 1959.  He married Ruth Bernstein in 1956 and  together they raised three children, David, Gail and Leonard. He received his Masters of Law from the U of M in 1964 and became a nationally acclaimed  tax lawyer and author on the subject.

In 1970, Asper was elected leader of the Manitoba Liberal Party. He represented a civil-libertarian strain within the party and in fact introduced a Bill of Rights into the Manitoba Legislature. He resigned as party leader and MLA in 1975, though he continued to support the Liberal Party in later years.

His media business started in 1974 when he purchased a failing television station in North Dakota which became Winnipeg television station CKND-TV in 1975. A few years later Asper bought another failing enterprise, the Global Television Network.  After creating one of the country’s first merchant banking operations via Canwest Capital Corp., in 1984 these two stations became the core of his media empire, CanWest Global Communications which included the national TV network, thematic TV channels, daily newspaper National Post and over 30 other Canadian newspapers, as well as holdings in New Zealand, Australia, Ireland and Chile. At its peak Canwest had $3 billion in revenues and was traded on the Toronto Stock Exchange and for some years on the New York Stock Exchange.

Asper was noted for his fierce loyalty to Manitoba, refusing enticements to move east to Toronto.  The Faculty of Management at the University of Manitoba renamed itself the Asper School of Business in 2000. Through The Asper Foundation, which he and his wife Babs founded in 1983, sizable donations have been made to the Winnipeg Foundation, the Jewish Foundation of Manitoba, the St. Boniface Hospital & Research Foundation, the Asper Jewish Community Campus, Assiniboine Park and as well as to numerous arts and community organizations in Winnipeg, Canada and Israel.

The Canadian Museum for Human Rights, inspired by the success of the Foundation’s Human Rights and Holocaust Studies Program, was the dream of Israel Asper as a place where students and others from across Canada and beyond could come to learn about human rights. He also saw it as an opportunity to revitalize downtown Winnipeg and increase tourism to the city. The Asper Foundation also committed a lead gift to the Museum.  A federal Crown Corporation since 2008, Asper launched the CMHR on April 17, 2003, the 21st anniversary of signing of the Canadian Charter of Rights and Freedoms.