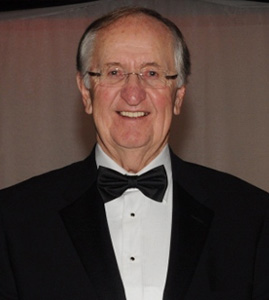 In many ways, Elmer Hildebrand and Izzy Asper followed the same business model. Just as Asper built a Canadian television empire from a single station in Grand Forks, Hildebrand assembled a Prairie powerhouse in radio. He started out in 1957 at CFAM, an AM station servicing Altona and Steinbach. He worked his way up to the top and over the next half-century, built up Golden West to 40 AM and FM stations and 16 community portals across the Prairies. He’s not done yet, either. Golden West is waiting for regulatory approval for another station it recently purchased bought and it has also submitted applications for a couple more. “Either we grow or we shrink,” he says.

Rather than trying to be all things to all people, Hildebrand and his team have remained steadfast in their focus on the local community. Need information about the curling bonspiel, the mayoral town hall or the fundraising bake sale? Don’t touch that dial. In fact, for many communities from northwestern Ontario to Alberta, Golden West provides the only daily source of local news and information.

“We do local and then we do more local. As long as you do that, then you’re relevant. If you don’t in today’s age and the station is just about music, you’re not needed. People can get music from anywhere. The local information, however, you can’t get anywhere. It’s not on satellite,” he says.

In his early years, Hildebrand started out making small share purchases and by the 1980s, he found himself the controlling shareholder. A decade later, he owned the entire company. Today, he’s still holds the controlling position but his family and senior employees have joined the ownership ranks.

Hildebrand says the phone call telling him of his pending induction into the Manitoba Business Hall of Fame was completely unexpected. “It was a surprise. Whatever we have done at Golden West, however, hasn’t been for this kind of recognition. We’ve just been doing what we think is the right thing to do,” he says.

That attitude permeates his personal life and that of his wife, Hilda, too. Need a volunteer or looking to raise some money? Give them a call. They have long lent a hand to local churches, festivals, museums, charitable organizations, arts councils and sporting groups. Hildebrand has been to more than his fair share of awards dinners. He was appointed to the Order of Canada in 2013 and he received the Queen’s Diamond Jubilee medal the year before. He’s also a two-time winner of the broadcaster of the year award and has an honourary life membership from the Western Association of Broadcasters.