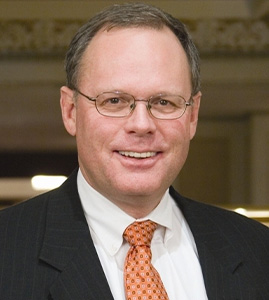 Sandy Riley went to the most prestigious law school in the country and while he learned many valuable skills at Osgoode Hall, his brief career as a lawyer taught him one thing – he wanted to go into business.

Even while he was studying, law school was little more than a distraction from fulfilling his sailing aspirations of competing for Canada at the 1976 Olympics in Montreal. But when sailing was done and he started working at a firm specializing in family law, he made his most important legal finding. “I discovered, to my horror, that I hated it,” he said. So, he set about to build a business law practice. The best way to do that, of course, was to land a bank as a client but wouldn’t you know it, every bank was already spoken for. So, he did the next best thing and helped start up a credit union, the Professional Financial Savings and Credit Union, which also led to the establishment of a securities firm. There was no shortage of work, just time.

“I was spending half my day at the securities firm, half my day on the legal work and half my day with my family. I was burning the candle in too many directions. I enjoyed the business part of it but I needed to get in a situation where I could get paid on the business side of things so I’d have the proper amount of time for the rest of my life,” he said.

He tried to raise money to start a mutual fund company geared towards doctors, dentists and lawyers. One potential donor declined to write him a cheque and instead offered him a job to set up a mutual fund for him. Riley asked why he should accept such an offer. “Because I have the resources to make it happen, you won’t,” he said.

Eventually, Riley accepted the offer and took the job at Trilon Financial in 1985. He rose through the ranks to become chief operating officer, which prepared him to become president and CEO of Investors Group in 1992. Under his leadership, it became one of the most dominant players in Canada’s financial services sector. After spending nearly a decade at the helm, he took on a new challenge, partnering with Winnipeg’s first family of business – the Richardsons – as president and CEO of Richardson Capital, a position he continues to hold today.

But perhaps Riley’s most visible role in his adopted hometown – he was born in Montreal – was as chairman of the 1999 Pan Am Games, the biggest multi-sport event ever held in the city and one of the biggest ever in North America. He believes it was a seminal occasion in Winnipeg and helped spark a revitalization both in business activity and, perhaps more importantly, the can-do attitude of its people.

Talking about it today still gives him goosebumps.

This is far from the first time Riley has been honoured. He was appointed to the Order of Canada in 2002 and 11 years later to the Order of Manitoba. He was also inducted into the Manitoba Sports Hall of Fame in 2009. He said he was surprised to get the phone call from the MBHOF.

“I’m obviously very appreciative but I still feel very engaged and active and feel I’m going to be for a number of years to come. I don’t think of myself as someone who has reached a stage when you go into a hall of fame because I’m still doing it,” he says.