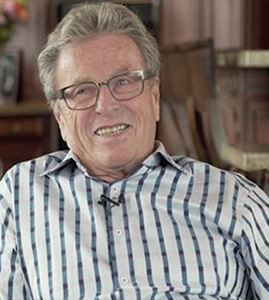 Either you catch the wave or it catches you. Herb Buller was most definitely hanging 10 as he rode the wave of personally designed kitchens all the way to the Manitoba Business Hall of Fame. The co-founder of Kitchen Craft started off with a handful of employees manufacturing kitchen cabinets in a 10,000-square-foot facility in 1981 and built it up to nearly 1,000 employees in a 500,000-square-foot plant just 14 years later.

“There was a change from manufacturing kitchen cabinets on site in the homes to building them in a manufacturing plant,” Buller says. “There was a boom going on that was sweeping the whole country. We hit it right at the right time.” Indeed, but the ride wasn’t without the odd rogue wave. The company did very well for its first 10 years but then the recession of the early ’80s hit, forcing Buller to make cut backs and lay some people off, something he was loathe to do. Luckily, things turned around in 1985 and by 1994 Kitchen Craft was pulling in $50 million in sales. It seems so obvious today but back when the company first started out, having a showroom for kitchens was practically revolutionary. “People could come and see our products. They’d have a sketch of what they wanted and we’d go visit them at their home and do a final plan. It’s always the woman who decides on the style of the door. The door of the kitchen cabinet is really what sells the product,” he says.

The company started growing exponentially, thanks largely to entering the U.S. market as the Canadian dollar was falling to historic lows, making its products extremely competitive south of the border. Buller was rewarded when he received an offer from Iowa-based Omega Cabinets, which bought Kitchen Craft in 1999. Omega was subsequently sold to Fortune Brands for $538 million. Buller had come along way from the 1960s, when he put himself through university working in the concrete business pouring driveways and sidewalks. He would like to say that he and Kitchen Craft’s co-founder, John Rademaker, had seen the future and got out ahead of the market but, well, he’d be seriously stretching the truth. “We weren’t that smart. I knew about concrete work and manufacturing and John knew about selling. We caught the trend,” he says. Buller, is also the co-founder of Midland Concrete Product and Norcraft Canada, which is also in the kitchen cabinetry business.