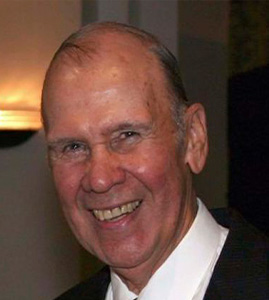 Nobody in the Everett family imagined that the three old pumps at their Dominion Motors automobile dealership in downtown Winnipeg in the 1950s would help them revolutionize the gasoline business in Manitoba.

The pumps were primarily used to fill up the rental cars at Canada’s largest Ford dealer but then a nearby taxi company shaved two cents per gallon from its price and regular motorists took notice and started lining up.

Douglas Everett was reluctant to compete but then he took some valuable advice from his father, Horace. “ He insisted that we compete since (our motto was) ‘we sold the best for less.’ My brother and I wanted to meet the two cents per gallon but our father insisted we go five cents off,” he said. “Well, we (had) Graham Avenue from beyond the Eaton’s building lined up with cars (to fill up).” The Everetts believed the three pumps were designed to do about 25,000 gallons per month before they would break down but they proved to be far more resilient.“We did 200,000 gallons. That got us into business in a big way,” he said.

The business plan for the company that became Domo – that’s short for Dominion Motors – was to pitch Safeway to build a small kiosk with two pumps on the front of the grocery parking lot. The rationale was that part of the lot generally wasn’t taken up by people buying fruit and vegetables and was instead used by “pirate parkers” who were going somewhere else. In 1970, Safeway agreed to three locations, one each on Ellice Avenue, Pembina Highway and Ferry Road, and the Manitoba gasoline sector was never the same.

Domo kiosks sold gas for a nickel less than the major retailers but because their overhead was so much lower, they were remarkably profitable. “They were dedicated to selling gas and very little else,” he said.

The first kiosks were designed to look like miniature replicas of the neighbouring Safeway stores.

But it wasn’t all smooth sailing. The established retailers didn’t think much of the upstart and tried a series of price wars to compete them into submission but it didn’t work. Motorists supported Domo and liked that they lived up to their “Jump to the Pump” marketing slogan. “The oil companies felt that gasoline retailing was their business and that they should not only search for gasoline and refine it but that they should also market it,” he said. “Our competition in the field resulted in lower prices and that continues today.” Indeed, Domo has more than 100 locations across Western Canada.

Prior to Everett’s Domo career, he served in the Canadian Navy, became a lawyer and was called to the bar in Ontario in 1950 and Manitoba in 1951. He was appointed to the Canadian Senate in 1966 and served until 1994.

Senator Everett was a senator known to do things his own way. “I had given up the chairmanship of the (Senate) Finance Committee, which I had held for many years and I wasn’t involved in work in the senate as much as I had been.” From 1988 until his resignation, he sent his monthly paycheque back to the government. “It’s no big deal,” he said at the time. “It’s really just a subjective decision that makes me feel a little better.”