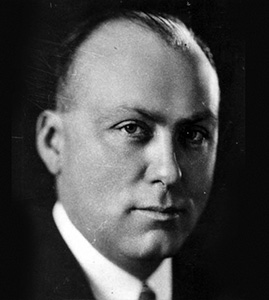 James Armstrong Richardson was a visionary business leader with a particular ability to see the commercial application of new technology.  Under his direction, the Richardson organization achieved its greatest expansion and diversification to that point in history.  James became employed with the family firm in 1906 after graduating from Queens University. In 1910 he became the fourth President of James Richardson & Sons, Limited.

Under James’ direction, the Firm made its far-sighted move into investment securities.   In 1926, the company joined the Montreal Stock Exchange and soon acquired the Winnipeg office of Wall Street brokerage, E.A. Pierce & Company.

Simultaneously with the entry in the Canadian investment business, the Firm embarked in a goodwill effort in radio, beginning with a small station in Moose Jaw.  The broadcasting of grain and stock prices along with entertainment proved so successful that a Radio Department was formed and additional stations were soon opened in Regina, Yorkton and Winnipeg.

James Richardson’s foray into aviation began in 1926 through a chance meeting with a bush pilot.  James immediately recognized how aviation could speed the development of Canada’s northern mineral resources, and he soon formed Western Canada Airways Limited.  In 1929, this company was merged with other operations to form Canadian Airways Limited, Canada’s first national airline with James as president.