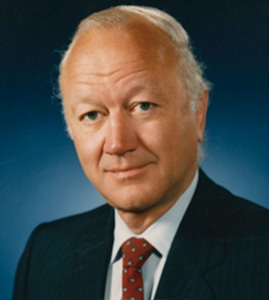 Jim Burns might be the most loyal employee in Manitoba’s history. One of five new members of the Junior Achievement of Manitoba’s Business Hall of Fame, Burns has been affiliated with one company – Great-West Lifeco – for more than 60 years.

The now 84-year-old joined Great-West in 1953 after getting a Bachelor of Commerce from the University of Manitoba and an MBA from Harvard University. He worked initially in the marketing department before being named executive vice-president in December, 1970. Three months later, he became president and CEO at the age of 41. At his first annual meeting, he also proved to be a bit of a clairvoyant.   “We are very optimistic and enthusiastic about our base for future growth in the U.S,” he said.

Today, Denver-based Great-West Financial has become a leading player south of the border, with about 20 per cent of Lifeco’s total of $758 billion in assets under administration.

Just eight years later in 1979, Burns became president and CEO of Power Corp., Lifeco’s parent company. During his nine-year run there, he was also the chairman at Great-West. He then went on to run Power Financial Corp. from 1986 to 1990 before becoming the chair of Great-West once again.

Along the way, Burns received numerous honours, including being named an officer of the Order of Canada and the Order of Manitoba. While he gained an international reputation for his business acumen, he was also known for his quick wit. The many years during which he chaired Great-West’s annual general meeting were just as notable for his ability to make a joke out of something as mundane as voting in a corporate auditor as they were for reporting rock-solid financial results. Some shareholders referred to the meeting as the “Jim Burns stand-up comedy hour.”

The man referred to as a “country bumpkin” by Power’s Paul Desmarais Sr. and former Prime Minister Jean Chretien, Burns was proud to spend most of his career in his hometown. “It was an advantage to be in Winnipeg. Toronto is all full of themselves. It wasn’t too difficult to run circles around them,” he says.

Burns has also served as a director of a number of major Canadian corporations and several cultural, educational and philanthropic causes, including the Manitoba Museum of Man and Nature, the Conference Board of Canada and a little hockey club in the World Hockey Association called the Winnipeg Jets. Burns got involved in 1974 when the team was in financial trouble during the first “Save the Jets” campaign and if it weren’t for the efforts of him and a small handful of others, Winnipeg wouldn’t have been welcomed into the NHL in 1979 let alone in 2011.

Now an honourary director of Great-West, Burns still follows the company closely. “I make trouble for all the young guys all the time. They wish I’d go away,” he says with a laugh.