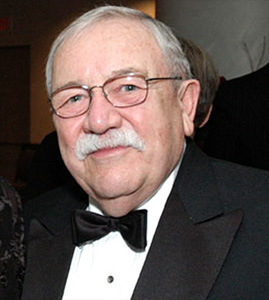 Johnny Buhler never claimed to be the smartest entrepreneur in the world but you wouldn’t dare question his business IQ.

The now 81-year-old entrepreneur-turned-philanthropist turned the purchase of a single company in 1969 – Standard Engine Gas Works in Morden, Manitoba – into a manufacturing empire.

He immediately renamed it Farm King Ltd. and a quarter of a century later, he formed Buhler Industries. He then bought Canada’s last remaining tractor-manufacturing plant, rechristening it Buhler Versatile, in 2000.

“My whole success was based on utilizing the talents of people who are a lot smarter than I am,” he says.

“I always wanted to build farm machinery and had this dream of building a tractor, so it all fit in with my long term dream. I bought this factory in Morden and expanded. We grew very slowly and steadily,” he says.

He completed the cycle in 2007 when he sold a majority stake in his company to Russia’s Rostselmash Ltd. in November 2007.  The group made a number of attempts to buy the company but each time Buhler rebuked them, saying it wasn’t for sale. Then they offered him $195 million cash.

“I choked and gave a very feeble response after my wife (Bonnie) was kicking me under the table. That was it,” he says with a laugh.

“Then these Russians who needed an interpreter (during the negotiations) were suddenly able to write a memorandum of understanding in perfect English,” he said.

Today, the Buhlers are a philanthropic power couple. Together, they have supported a laundry list of Winnipeg institutions including Seven Oaks Hospital, St. Amant Centre, St. Boniface Hospital & Research Foundation, the Canadian Museum for Human Rights, Red River College and the University of Winnipeg.

“John likes to make the money, I like to spend it,” Bonnie says with a smile.

Thus far, the Buhlers have made charitable gifts totalling more than $60 million and they’re showing no signs of slowing down. (They have surpassed their original goal of $50 million and have since revised it upwards to $100 million.)  They do their own research on potential projects but they don’t consider anything unless it can use a minimum $1 million donation.

Being inducted into the Junior Achievement Business Hall of Fame is the latest in a long line of honours for Buhler and he says he’s thrilled to be mentioned in the same breath as likes of Izzy Asper, James Richardson, Samuel Bronfman and Robert Chipman.

“They were all my idols,” he says.

Two years ago, he received the Order of Canada. The year before that, he was honoured with a degree for distinguished achievement during the University of Manitoba’s fall convocation.