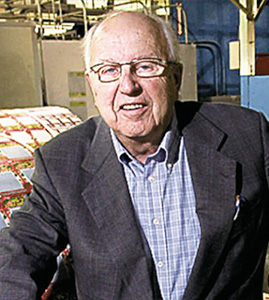 Lawrie Pollard mortgaged everything he owned to take a chance on instant scratch and win lottery tickets in 1985.\

Is there anything more entrepreneurial?

The printing industry veteran has spent 67 years with the family business but none was more challenging than 1985. The company, which had earlier prospered as a printer of advertisements and stationery, had hit a wall and needed to diversify if it was going to survive.

It had started making some break-open tickets a decade earlier but nothing Pollard tried – stamps, cheques, banknotes – was the silver bullet.

Then the Western Canada Lottery put out a request for proposal for instant scratch-and-win tickets. Pollard thought the company should jump at the opportunity but his two older brothers, who were also partners in the company, didn’t want to do it. Pollard bought them out.

He then mortgaged his house and borrowed $5 million to acquire the technology and machinery required to turn the 77-year-old printing shop into a lottery ticket manufacturer. Not only did he gamble that this unproven niche would save the company, he also hoped it would catch the eye of his two eldest sons, Gordon, a corporate lawyer, and John, an accountant. Indeed, John joined the firm in 1886 at age 25 and Gordon followed three years later at 30.

“Young people like to go where there’s growth,” the elder Pollard said.

Even the slightest hiccup might have been the company’s downfall. CIBC, its major creditor, put the company on a watch list and went so far as to station an employee at Pollard Banknote to sign off on all cheques. That was one step from calling the loan.

Slowly but surely, the company turned things around – including switching over to TD Bank, which is still a partner today – and the move eventually paid off very handsomely.

Pollard Banknote had 50 employees and sales of $1.6 million in 1977. Today is has 1,100 employees in five locations across North America and sales of $185 million. Serving more than 50 lotteries around the globe, it has become one of the top three international players in the field with the capacity to produce about 18 billion tickets annually.

“Whatever you’re doing today is going to be obsolete one day. As a business, you’ve got to evolve but evolving a business is really difficult. You should expect to have several failures along the way,” he says.

L.O., as he’s known by many friends and colleagues, started out working for dad, Wilbur, back in 1947 when the company was known as Saults & Pollard. He then moved up to president, replacing his dad.

He stepped down from running the day-to-day operations in 1997 and was replaced by his two eldest sons as co-CEOs. Since then, he has served as chairman and most recently, chairman emeritus.

(Gordon has since been named board chair and youngest son Doug has joined John as co-CEO.)