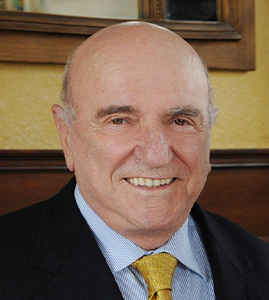 Some entrepreneurs go into business because they hear a calling while others see an opportunity. Louie Tolaini had no such tip off from any of his senses. Instead, the man who founded TransX Group of Companies was almost forced into the trucking industry more than a half-century ago.

“I was 19 years old. When you can’t read or write or speak English, you don’t have too many choices. Driving a truck was a logical thing to do,” he said. Employers in southwest Manitoba weren’t exactly beating the bushes for workers from the Italian old country with a Grade 5 education back then, either. But what he did have was an unparalleled desire to succeed, driven in large part by growing up poor.

“The one thing I’m afraid of is poverty. When you’ve been poor and go to bed hungry, the world is a different place. I didn’t have a toothbrush or toothpaste until I came to Canada,” he said.

He remembers American soldiers coming through Italy after the Second World War and handing out food to the masses.

“They gave us canned ham and Klik. Man, that was good stuff,” he said. (There was no laughter after he said that because he wasn’t joking.) After arriving in Canada in the late 1950s, he worked evenings and weekends at his uncle’s restaurant in Virden and washed cars at the local Chevrolet dealership during the day. His first paycheque from Chevy totaled $25.50 but he felt like he’d won the lottery. After a while, he took a job working in the nearby oil fields. He learned to read and spell English at this time by reading Time magazine.

In 1963, he bought his first trucking business, a small operation with five trucks and seven employees, hauling general freight and livestock between Virden and Winnipeg.

Today, TransX is Canada’s largest privately-owned transportation firm and one of North America’s top 50 by revenue. It has 3,000 employees, 1,500 trucks and makes 72,000 shipments per month.

When Tolaini first started out, Winnipeg was the gateway to Western Canada but Calgary has since overtaken it as a transportation hub. Despite prodding to move his headquarters to a bigger centre, he remains committed to the city.

“If I lived in Toronto, I’d be within two hours of 90 per cent of my customers. Winnipeg, Manitoba and Canada have been good to me. A lot of people don’t realize how many good people there are in Manitoba. They’re terrific,” he said.

Tolaini was very pleased to be notified about his induction into the Manitoba Business Hall of Fame but couldn’t believe there weren’t more deserving entrepreneurs who had yet to be honoured. “Maybe they’re running out of people,” he said.

The many thousands of people who have received a regular paycheque from TransX over the last five decades would surely disagree. He still goes into the office every day. “I don’t know anything else. I used to play squash and tennis but my knees went. If I didn’t work, I’d go nuts,” he said.