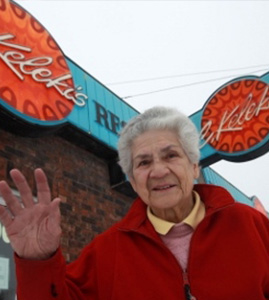 When Mary Kelekis decided to hang up her apron in early 2013, she had been a fixture at her family’s C. Kelekis Restaurant for 70 years. She was just a teenager when she first started serving skinny fries to customers, following in the footsteps of her dad, Chris – the “C” in the restaurant’s name – who started the business 11 years earlier out of the back of his car in 1932. A Model T, of course.

Soon after, he added hotdogs and corn on the cob to his menu. From there, he opened a pair of virtually identical restaurants in the mid-1940s, one at the corner of Main Street and Selkirk Avenue and the iconic location a few blocks away at Main and Redwood Avenue. (The former closed down in 1956 when the latter was expanded.)

Over the years, the eatery became a meeting place and part of the social fabric of not just the North End, but Winnipeg itself. How many former Winnipeggers, when they heard that the iconic restaurant was closing, flew back into town for one last burger or hotdog, often coming straight from the airport?

Kelekis never ran with a fast crowd so she was a little surprised to get a phone call telling her she was to be inducted into the Manitoba Business Hall of Fame.

“We made a name for ourselves on Main Street. We never made it in the big halls. We were very kind to the people of the North End. Everybody thinks because they live there that they’re not so (important),” she says. As much as she felt it was time to retire, the woman simply known as “Mary” to thousands, still misses one thing about going to work every day – talking with her customers.

“It was all part and parcel of growing up for me. You did it and you had fun doing it. I made a lot of good friends, too,” she said. The personal touch that she and her staff exhibited was Kelekis’s magic and separated it from so many other restaurants, she says. “More than anything else, we cared about what we were doing and made sure everything was fine and would please the customer. We also paid attention to the fact that customers are people and they like to talk to you. We always made it a point to talk to all of our customers. People don’t like to be ignored,” she said.

Kelekis has received many accolades over the years including the Order of Manitoba and the Press Club’s President Award. She is a founding member of Folklorama, which debuted in 1970, serving as co-ordinator of the Greek Pavilion.

Of course, no visit to Kelekis was complete without perusing the pictures on its wall of fame. It truly was a who’s who, including a pair of prime ministers, Pierre Trudeau and Jean Chrétien; former premier Gary Filmon; former mayors Susan Thompson and Bill Norrie; hockey players Bobby Hull, his Hot Line linemate, Anders Hedberg, Hull’s son, Brett, and Billy Mosienko; and entertainers Randy Bachman from The Guess Who and Let’s Make A Deal host Monty Hall. Iconic Winnipeggers, such as businessman Izzy Asper and sculptor Leo Mol, also graced the wall.