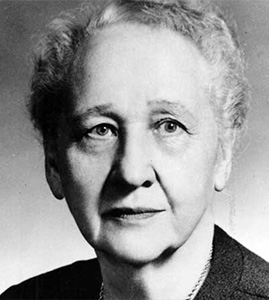 Muriel (Sprague) Richardson was the first woman to head a large Canadian company and has been described one as who set the standard for all those who followed. She was a kind, resolute leader, a champion of employee benefits and a patron of the arts.

Muriel Richardson, who had been a director of James Richardson & Sons, Limited since 1924, was elected the fifth President of the Firm shortly after her husband James’ sudden death in 1939.

Muriel had a keen interest in everything her husband had undertaken. A close associate was to record, “in their twenty years together, he had come a long way to prefer her counsel in business matters to that of many others.” In the decades that followed, she encouraged and closely supervised the Firm’s continued growth. Though she realized many goals, Muriel’s greatest corporate achievements were in Human Resources. She introduced a company pension plan in 1944, and a group life insurance plan in 1946.

During the 1950s, Muriel’s private nature and her leadership of a rapidly growing securities business led MacLean’s magazine to call her “The Shy Baroness of Brokerage.”  She retired in 1966 after 27 years of active duty, making her the longest-serving President in the Firm’s history.

Muriel Richardson’s contributions to the community were recognized on many occasions. She was awarded honorary degrees from Queen’s University and the University of Manitoba, and received the Golden Boy Award in 1961. In 1970, Governor-General Roland Michener presented her with the Manitoba Centennial Medal. For her dedication in helping establish the Winnipeg Art Gallery, the Muriel Richardson Auditorium was named in her honour.

In 1981, James A. Richardson and Muriel Sprague Richardson were both posthumously inducted into the Canadian Business Hall of Fame. Muriel was the first woman to receive this distinction.