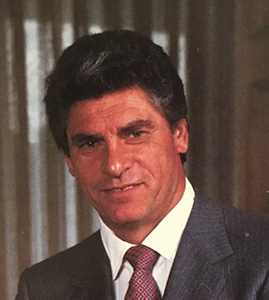 It seems whatever the founder of K-tel International touched turned to gold, whether it was greatest hit compilation records, kitchen gadgets and later online music sales.

Was there a house in Winnipeg that didn’t have a copy of Goofy Greats, Looney Tunes or Dumb Ditties on the turntable or the Miracle Brush, the Patti-Stacker or the Veg-O-Matic in a cupboard?

Kives, who was born in Oungre, Saskatchewan in 1929, authored a real-life rags-to-riches story that began in the clutches of the Great Depression, where his family lived without power or running water. Along the way he mastered the art of the sale, starting off by selling small appliances door-to-door, then harnessing the power of television advertising – his five-minute commercial for a Teflon non-stick frying pan in the early 1960s is widely considered to be the world’s first infomercial – and later expanding into a new-age phenomenon called “The Internet.”

“The business was kind of slowing down a bit, and boom, in came iTunes. God bless (Apple CEO) Steve Jobs. He gave us a new way of marketing our product,” Kives said back in 2009.

He was hands-on in every sense of the word, directing commercials in his own kitchen and the hands demonstrating the Patti-Stacker and Veg-O-Matic? They were his, of course.

“If you at the house at the time of the shooting, watch out, you might end up in the commercial,” says his wife of 45 years, Ellie. She says her husband, who died last year at the age of 87, would have been thrilled to be inducted into the Manitoba Business Hall of Fame. He was similarly honoured by the Canadian Professional Sales Hall of Fame in 2002.

“He would have been so proud. He really loved Winnipeg, it was just perfect for him. He never wanted to move to a bigger city. He knew so many people here and he talked to everybody. He asked everybody for their opinions (about new products). People would approach Phil and ask him what he was selling. He would get information from everyday people. Winnipeg was where he thrived,” she says.

The Kives household was always full of K-tel products. (Ellie admits to never buying a knife in her life). Phil memorably gave her a set of steam rollers shortly after their first date at the Pony Corral. “They changed my life. I didn’t have to sleep with rollers anymore. I gave one to my mother and my sister. All of my friends loved it but it wasn’t a big seller for Phil,” she says.

Items that didn’t go to the moon, however, served a crucial role – they were invaluable lessons that lead to the next big seller, like the Miracle Brush, which had sales of more than 28 million or the “Hooked on Classics” album, which sold more than 10 million copies.

Ellie Kives admits to being “quite naive” at the beginning about many of the products her future husband was selling. “I wasn’t into music that much. I had an album in my house sitting on the table. When he picked me up for a date, he looked at it. I didn’t know why he was so interested in it. It was one of his compilations,” she says.