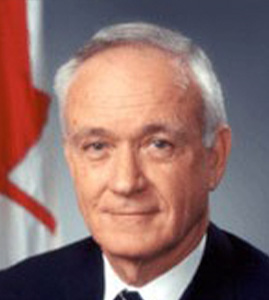 It took going to law school for Richard Kroft to figure out he wanted to make his mark in the business world. After graduating from the University of Manitoba in 1963 with a law degree, he joined McCabe Grain Co, where his father, Charles, was the president. His duties included in-house legal work and searching out new investment opportunities. But a year later in the spring of 1964, the opportunity found him. Charlie Lamont and a couple of partners had formed a company called Controlled Environments Ltd. but they had little more than a prototype and a few ideas, had never sold a product and had no financial resources.

They had worked at Coldstream Products, which produced commercial refrigeration boxes for retailers and grocers, but they saw an opportunity for more sophisticated products and control systems to meet the needs of agricultural research at the University of Manitoba. The new venture was christened Controlled Environments Limited, later to be known as Conviron. Kroft officially became the president in 1984 but he had the full responsibility for running the company for many years before that.

This year, as it celebrates its 54th anniversary, it is the world’s largest designer and supplier of plant growth chambers and rooms. He admits a little bit of luck played into his story as he was in the right place at the right time. But he also wasn’t afraid to take a chance, either. “Having been exposed to business all of my life through my father, I knew what was possible. I was ready to bite the bullet,” he said.

Richard Kroft only stepped away from Conviron when Prime Minister Jean Chretien asked him to join the Senate in 1998. He didn’t have much time to mull over his decision. “I got a call on Thursday and was in my seat in the Senate the following Monday,” he said. His son, Steve, who had joined the company 18 months earlier, stepped in to fill his father’s shoes. The first thing Kroft did upon arriving in Ottawa was to learn the Senate ethics rules and upon doing so he immediately removed himself from any active role with the company. “It was something to which I paid a great deal of attention,” he said.

After stepping down from the Senate in 2004, Kroft returned to serve as Conviron’s chairman. The business opportunity may have been in Winnipeg all those years ago, but Kroft doesn’t believe the company could have done any better anywhere else. “We’re in the midst of an agricultural community, both commercial agriculture and the science of agriculture research. International trade and exports was something with which I was very familiar. I knew all of the essential elements were in Winnipeg. We had bankers who understood foreign exchange and we had knowledgeable customers and we could find the talent we needed at the University of Manitoba and Red River College,” he said.

Joining an exclusive club in the Manitoba Business Hall of Fame with members named Richardson, Asper, Buhler and Cohen means a great deal to Kroft. “I think it’s a particularly interesting group because they reflect Winnipeg so well. You’ve got the tycoons and you’ve got the people who are just part of Winnipeg life, like Mary Kelekis,” he said.