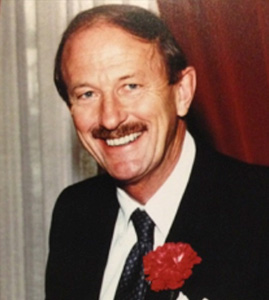 Who could have ever guessed that one man buying a single automobile dealership in 1963 could lead to the return of the NHL to Winnipeg?

Certainly that was the furthest thing from the mind of R.M. (Bob) Chipman when he first headed up Birchwood Pontiac Buick Ltd. more than a half-century ago. But quietly and methodically, he built up the family holding company, Megill-Stephenson, into what is now a behemoth with diversified business interests in the automotive, real estate, construction, sports and entertainment and financial-services industries.

“He’s the greatest entrepreneur this city has seen,” says Nick Logan, CEO of National Leasing, who worked alongside Chipman, the longtime chairman of the company, for more than 35 years.

Chipman lost his battle with bone cancer in September, 2013, at age 87. He was predeceased by his wife, Sheila, in 2005. Four of his keenest followers were his children, Steve, Mark, Jeoff and Susan, all of whom followed him into the business world. But he was also a mentor to countless others, both at Megill-Stephenson and around his beloved hometown of Winnipeg.

Despite his success, Chipman was never one to seek out the spotlight, preferring instead to let others bask in it. It was not surprising, then, when he arrived at the press conference on May 31, 2011, to announce the purchase of the Atlanta Thrashers by the Chipman and Thomson families that he moved to the back of the room. It was only when his daughter, Susan, took him by the arm that he sat in his assigned seat – the one in the front row with his name on it. “I think Winnipeg now has equal status with Montreal, Toronto, Calgary, Edmonton, Ottawa and Vancouver as a truly important Canadian city,” he said after the press conference.

The Chipman family’s dream of bringing the NHL back to Winnipeg began right after the original Jets finally lost to Phoenix in 1996. Chipman was one of a select group of business leaders who spearheaded the “Save The Jets” campaign back in 1995. Before that, he was on the Jets’ board and was chairman of Winnipeg Enterprises. “I’ve been around this (NHL hockey) story for a long time. I’ve been very fortunate to have such a wonderful family and to work with a lot of great people. I’m a very fortunate guy.”