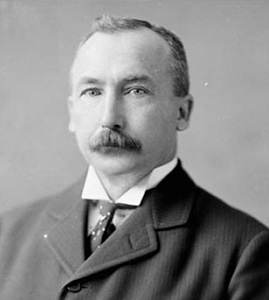 Although Sir Clifford Sifton, lawyer, politician and businessman was one of the ablest politicians of his time, he is best known for his aggressive promotion of immigration to settle the Prairie West.

Sifton moved to Manitoba in 1875, graduated from Victoria College (Cobourg, Ont.) in 1880, and was called to the Manitoba Bar in 1882. He was first elected as a Liberal MLA for Brandon North in 1888 and on May 14, 1891 became attorney general in the government of Thomas Greenway.

His brilliant defense of the “national school system” (est 1890) brought him to prominence. After the Laurier-Greenway compromise on the Manitoba Schools question in 1896, Sifton became federal minister of the interior and superintendent general of Indian affairs in Laurier’s government Nov 17 of that year.

He was the principal negotiator of the Crow’s Nest Pass agreement with the CPR and was responsible for the administration of the Yukon during the gold rush.  He was the agent in charge of presenting Canada’s case to the Alaska Boundary Tribunal in 1903.

His promotion of immigration was an immense success. Taking advantage of a strong economic recovery that made farming in the West more attractive, he established a vigorous organization to seek out settlers in the US, Britain and – most controversially – east-central Europe.

Sifton resigned on February 27, 1905 following a dispute with Laurier over school policy for Alberta and Saskatchewan. He never acquired a broad view of the compromises necessary to protect minority rights in Canada. In 1911 he broke with the Liberal Party on Reciprocity with the US, supporting the Conservatives, though he did not run for Parliament again.

He was chairman of the Canadian Commission of Conservation  1909-18, promoting a wide spectrum of conservation measures. He was knighted January 1, 1915.  Instrumental in the formation of Union Government in 1917, he subsequently preferred the Progressives, and then the Liberals under Mackenzie King.  His most important acquistion was the Manitoba Free Press; its editor, J.W. Dafoe, became his closest confidant and eventual biographer. Sifton was a man of unusual achievement despite the deafness that afflicted him most of his life. He considered the settlement of the West a sufficient monument to his endeavours.